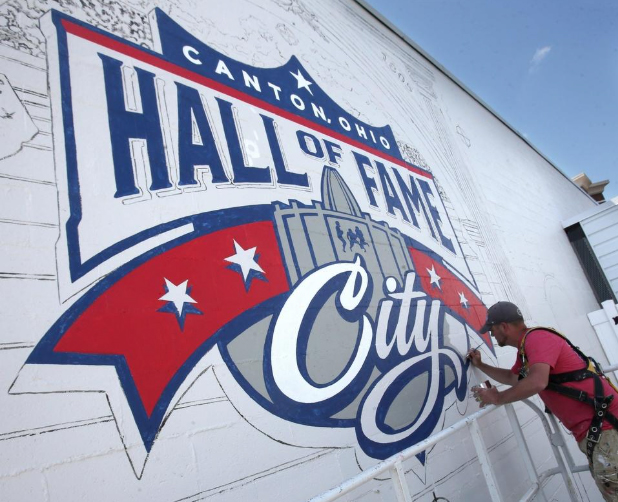 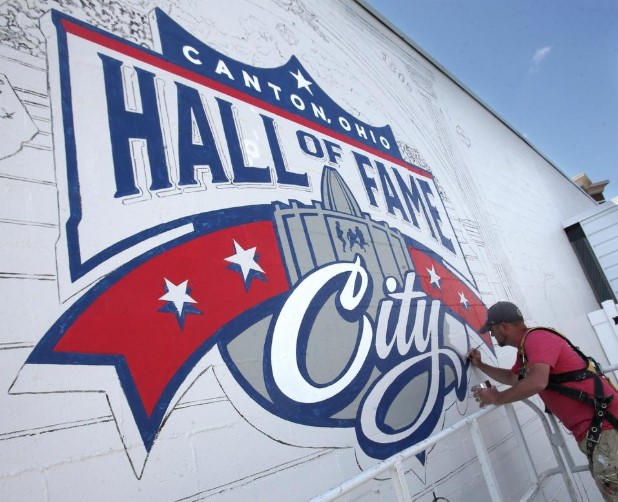 Downtown Canton visitors this summer will have the chance to see a major mural taking shape.

North Canton-based artist Dirk Rozich, whose mural celebrating the New York Jets’ victory at Super Bowl III adorns a prominent wall at the Cultural Center for the Arts, is busy creating an ambitious painting with a very local theme.

Titled “The Founders,” Rozich’s new mural will cover two outside walls of a building near the Cleveland Avenue and Sixth Street NW intersection. The mural will depict two men instrumental in the formation of what would become the National Football League, Ralph Hay and Jim Thorpe.

On Sept. 17, 1920, Ralph Hay, the owner and coach of the Canton Bulldogs, invited 11 other team owners to his Hupmobile dealership in downtown Canton for a meeting to create what would become the National Football League. Rozich’s mural will feature Hay along with Jim Thorpe, Bulldogs player and eventual Olympic gold medalist.

Also part of the mural, and the first part being painted, is a bold logo Rozich designed that incorporates the Pro Football Hall of Fame and the slogan “Canton, Ohio, Hall of Fame City.”

“It’s colorful, positive and something that conveys pride,” Rozich said about his logo, which he hopes the city of Canton will officially adopt.

“The reason I’m doing this mural is in memory of Dr. James King, who passed away two years ago,” Rozich, 40, said about “The Founders.”

The grandson of Hay, King commissioned Rozich in 2015 to create a painting depicting the historic meeting at Hays’ car dealership. “Ralph Hay is not in the Hall of Fame, and one of Dr. King’s life missions was to get his grandfather a gold jacket,” Rozich said.

Because no photographs exist of the historic 1920 meeting, Rozich had to improvise. “Dr. King and his family posed on Hupmobiles as my models,” the artist said. “They had cigars and beer, just like at the original meeting.”

King “was ecstatic” about Rozich’s completed acrylic painting, which measures 17 by 39 inches. In the summer of 2018, Abbott Electric paid to have the painting enlarged and and printed on a nylon mesh banner that hangs on the side of Canton City Hall.

After the painting commission, “Dr. King and I became pretty close,” Rozich said. The men had several meetings to discuss a planned downtown mural of Hay and Thorpe, and Rozich made sketches, but King died in June 2018 at age 81.

“I loved Dr. King. He was a catalyst for the explosion in my career,” Rozich said. After David Baker, president of the Pro Football Hall of Fame, saw the painting Rozich had painted for King, it led to an ongoing series of lucrative painting commissions for Rozich by the HOF.

Rozich’s current mural, being painted on the building that houses Canton Glass Works, came about after Rozich reached out to King’s widow, Charlene. The project is being privately funded by colleagues of King and friends of his family.

The artist said he’s hopeful the mural, located next to Julz By Alan Rodriguez, will be seen by visitors to downtown’s new Centennial Plaza. He expressed excitement that it’s located on the grand parade route of the Pro Football Hall of Fame Enshrinement Festival.

It was in August 2017 that Rozich unveiled his aforementioned New York Jets Super Bowl mural at the Cultural Center. It was commissioned by ArtisinStark as part of, part of The Eleven, a series of public artworks downtown that depict the 11 greatest moments in NFL history. It was at the unveiling that Rozich met the Jets’ star quarterback and pop-culture superstar Joe Namath.

“He is the kindest, sweetest, warmest man I’ve ever met,” Rozich said of Namath. Enthusiastic about Rozich’s artwork, Namath “asked me to be part of his team. I’m his brand's illustrator. I design all his apparel.”

Last September, for a charity auction to benefit the Joe Namath Charitable Foundation, Rozich donated an original painting of Namath wearing a fur coat in his 1970s “Broadway Joe” heyday that sold for $15,000.

Continuing the increasing football theme of his career, Rozich has been commissioned by the HOF to paint portraits annually that are presented to the honorary recipients during the Super Bowl’s Merlin Olsen Luncheon. This year, he painted three, of Miami Dolphins owner Stephen Ross, Dolphins quarterback Dan Marino, and Dolphons coach Don Shula, who died May 4.

A graduate of West Branch High School, who earned a BFA in illustration from the Columbus College of Art and Design, Rozich and his wife Nicole have two children, Landon and Hartley.

“I didn’t think I’d be an exclusive illustrator of football, but I’m enjoying it,” he said smiling, during a break from mural painting. “It’s been a great ride so far.”

-Story by Dan Kane of the Canton Repository